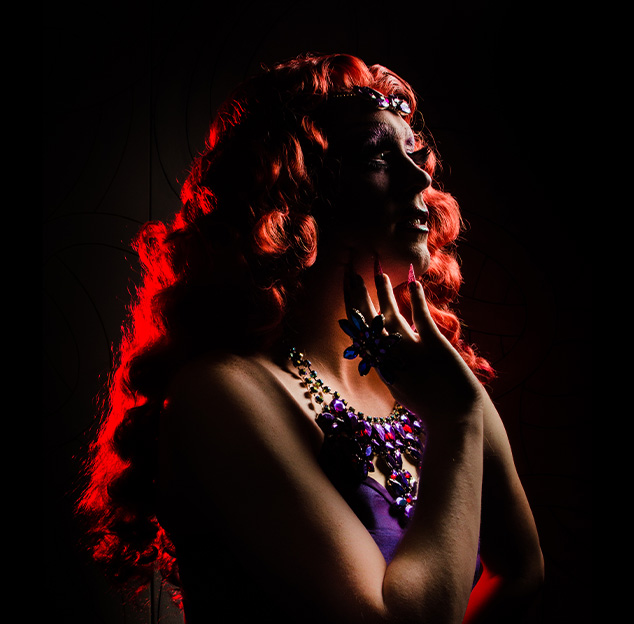 Oriana Peron is a cosplaying, costume, and fashion designing, drag queen. She has been cosplaying since 2006 when this nerdy hobby turned into a passionate career. Oriana has studied theatre and costume design at Indiana University and continues her studies with a focus on fashion design, metalsmithing, and jewelry. Recently, Oriana has produced and performed her Drag Race and Drag Show events at Ohayocon, Anime Magic, AnimeNext, C2E2, Matsuricon, and ACEN. Oriana currently lives in Bloomington, Indiana and is a producer and host for her shows, “World of Fantasy” and “World of Gayming” at The Back Door. Her favorite thing is dressing up like cartoon moms and sending memes to all her friends. Oriana looks forward to conventions coming back and seeing all her friends and fans again!

Over the course of Anime Central, Oriana will host a number of panels including: makeup for cosplay and drag, Sailor Moon, drag race and a drag show.

Join Drag Queen Oriana Perón as 5 contestants compete for this year’s title! All humans are welcome to compete, all genders, all sexualities, even if you’ve never done drag! Sign-up at the event. America’s premiere Drag Cosplay Star directly from the Midwest, Oriana Perón, wants to see you there!

Get ready for The Original Cosplay Drag Show starring Oriana Perón and featuring some of the hottest Drag Cosplay talents, including local stars! Oriana has brought some wild and exciting queer entertainment for you, so come and enjoy the show. All ages, gender identities, sexualities, and humans are welcome to enjoy this award-winning lineup. The winner of the Drag Race competition gets to perform!