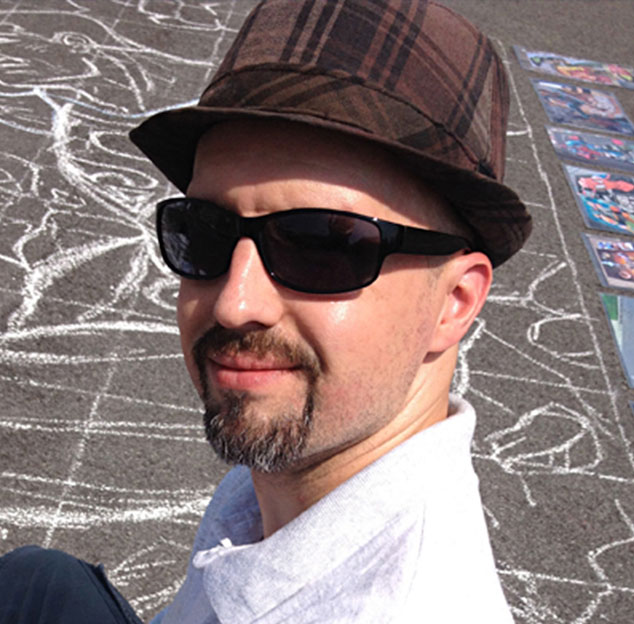 Eric Maruscak has been appearing at conventions across the Unites States, making giant chalk murals as performance art since 2006, focusing on Anime/Comic Book Imagery and Pop Culture themes.

This will be Eric’s 8th appearance at Anime Central. He has also appeared at the San Diego Comic Con, the New York Comic Con, the New York Anime Festival, Anime NYC, Anime Frontier in Texas, Anime Expo in Los Angeles, the Baltimore Otakon, the World Science Festival in New York City, the International Toyfair and Playfair, the Penny Arcade Expo in Seattle, Star Wars Celebration V and VI in Orlando, and a number of Wizard World Shows across the United States, just to name a few.

Some of Eric’s clients have included creating promo art for 2 seasons of “Star Wars: The Clone Wars” for Lucasfilm, and creating artwork for the Legend of Zelda at the San Diego Comic Con. Other clients have ranged from companies such as Crayola, Nintendo, 2K Games, anime companies such as FUNimation, Aniplex, CrunchyRoll, and Viz Media, and many more including Virgin Atlantic, ESPN, Warner Brothers, Nickelodeon, Marvel and DC Comics, and more!

Some of Eric’s murals take over 30 hours to complete during the course of an appearance, so he records time lapse videos of the entire process which are posted online not long after the show. You can see more of Eric’s videos at his youtube channel Pepperink4242, and at his website www.pepperink.com, or follow him at facebook.com/pepperink, and on twitter and Instagram.

Samurai Dan and Jillian will Appear at Anime Central 2022