Anime Central has announced that American Voice Actor, Justin Briner, will attend this year’s event.  Anime Central will be held May 15-17, 2020.

Justin Briner is an American voice actor who has lent his voice for a number of English-language dubs of Japanese anime films and television series.  Primarily with those affiliated with the FUNimation simuldub service.  Most notably, for voicing Izuku Midoriya in My Hero Academia.  You can also hear him as Mikaela Hyakuya in Seraph of the End, Alfonso San Valiante in Garo: The Animation, Qwenthur Barbotage in Heavy Object, Kensuke Hanazaki in Trickster, Ryota Mitarai in Danganronpa 3, Nico in Nanbaka, and Alpha Omega Nova in Space Patrol Luluco.

In video games, you can hear him, Moska in Dust: An Elysian Tail, Yayan in DreadOut, Ichi in Cibele and Taro Megane in Akiba’s Beat. 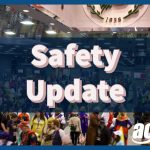